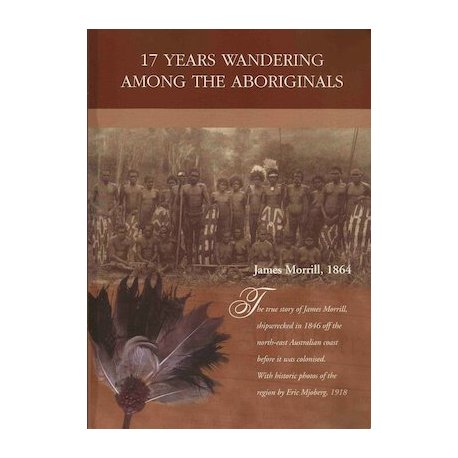 17 Years Wandering among the Aboriginals

A true account of James Morrill who was shipwrecked of the Australian coast in 1846 and was rescued by the Aborigines, living with them for the next 17 years. The book includes over 100 photos of Aboriginal body decoration, dance and ceremony, weaponry, fishing, baskets, stone tools, housing, bush foods, tree climbing to obtain food, and fire making. Many of these photos date from the 1880s.

James Morrill was born in England in 1824 and came to Australia as a sailor. He was on a boat travelling from Sydney to China when it struck a reef and sank. He and other crew members drifted 42 days before landing on the Queensland coast in northern Australia. Seven members landed, but most died soon afterwards. He alone adapted and survived, living as an Aboriginal until civilisation spread up the coast and finally reached him. He was found in 1863 and died two years later, possibly from sepsis from an earlier crocodile bite on the leg.